In addition to the NTP protocol specification, there exists a description for a kernel clock model (RFC 1589) that is discussed here.

NTP keeps precision time by applying small adjustments to system clock periodically. However, some clock implementations do not allow small corrections to be applied to the system clock, and there is no standard interface to monitor the system clock’s quality.

RFC 1589 defines a clock model with the following features :

5.2.1.2 Does my Operating System have the Kernel Discipline?

If you can find an include file named timex.h that contains a structure named timex and constants like STA_PLL and STA_UNSYNC, you probably have the kernel discipline implemented. To make sure, try using the ntp_gettime() system call.

The following guidelines were presented by Professor David L. Mills:

Feedback loops and in particular phase-lock loops and I go way, way back since the first time I built one as part of a frequency synthesizer project as a grad student in 1959. All the theory I could dredge up then convinced me they were evil, non-linear things and tamed only by experiment, breadboard and cut-and-try. Not so now, of course, but the cut-and-try still lives on. The essential lessons I learned back then and have forgotten and relearned every ten years or so are:

There is nothing in an analog loop that can’t be done in a digital loop except debug it with a pair of headphones and a good test oscillator. Yes, I did say headphones.

So, this nonsense leads me to a couple of simple experiments:

In very simple words, step 1 means that you measure the error of your clock without any correction. You should see a linear increase for the offset. Step 2 says you should then try a correction with a fixed offset. Finally, step 3 applies corrections using varying frequency corrections.

Most of the values are described in Q: 6.2.4.2.1. The remaining values of interest are:

During normal time synchronization, the server time stamps are compared about every 20 minutes to compute the required corrections for frequency and offset. With PPS processing, a similar thing is done every second. Therefore it’s just time synchronization on a smaller scale. The idea is to keep the system clock tightly coupled with the external reference clock providing the PPS signal.

5.2.3.2 How is PPS Processing related to the Kernel Discipline?

PPS processing can be done in application programs, but it makes much more sense when done in the operating system kernel. When polling a time source every 20 minutes, an offset of 5ms is rather small, but when polling a signal every second, an offset of 5ms is very high. Therefore a high accuracy is required for PPS processing. Application programs usually can’t fulfil these demands.

The kernel clock model includes algorithms to discipline the clock through an external pulse, the PPS. The additional requirements consist of two mechanisms: capturing an external event with high accuracy, and applying that event to the clock model. The first is solved using the PPS API, while the second is implemented mostly in a routine named hardpps() which is called every time when an external PPS event has been detected.

hardpps() is called with two parameters, the absolute time of the event, and the time relative to the last pulse. Both times are measured by the system clock. 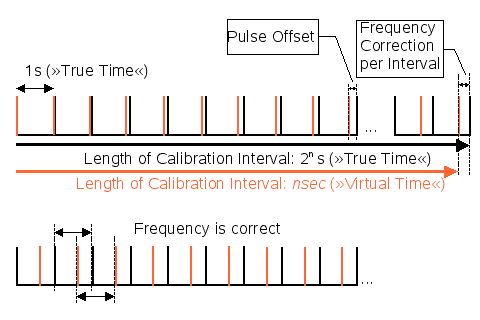 hardpps() can minimize the differences of both frequency and offset between the system clock and an external reference.

Flag STA_PPSFREQ enables periodic updates to the clock’s frequency correction. Stable clocks require only small and infrequent updates while bad clocks require frequent and large updates. The value passed as parameter is reduced to be a small value around zero, and then it is added to an accumulated value. After a specific amount of values has been added (at the end of a calibration interval), the total amount is divided by the length of the calibration interval, giving a new frequency correction.

When flag STA_PPSTIME is set, the start of a second is moved towards the PPS event, reducing the needed offset correction. The time offset given as argument to the routine will be put into a three-stage median filter to reduce spikes and to compute the jitter. Then an averaged value is applied as offset correction.