This section presents some background information and other related stuff that one may find interesting or entertaining.

Most people using NTP know that it has been invented by Professor David L. Mills. So they frequently address him to solve their problems. Unfortunately they mostly don’t know about Mills-speak, the language used by the aforementioned person. To avoid some disappointment, I’ll give a small example of Mills-speak.

Someone once had the misconception that the thing referred to as “nanokernel” was a kernel even smaller than a “microkernel”. Forwarding the problem to Professor David L. Mills, the answer was:

“A nanokernel is a species of korn. Korn is grown on Jupiter as a dietary supplement by the Nanos, a prehistoric people of predominantly aquatic descent. The ancient enemy of the Nanos are the Micros, who also grow a variety of korn. Their variety is closely related to the eggplant of today, although we know the eggplant is distantly related to chickens. In Micro mythology, chickens farm fields of eggplants that are specially grafted to korn and eventually evolve and emerge as hackers. Both Nanos and Micros prize hackers, which when planted in fields of chicken manure greatly vex the environmental authorities, since the confluence of the two peoples generally degenerate to clouds of messy, smelly swamp gas.”

Note: I’m not sure what question this answer refers to, but it could be referring to the fact that some black box NTP servers exist that use Linux as operating system. If you can correct me, please do!

Fancy that; when you pop the cover off the CPU chip, a little guy with pointy ears and a pitchfork snarls back at you. Like the time I popped the lid off a digital wristwatch and found a little Micky Mouse etched in the silicon.

Still another one dealing with specifications of clock errors:

A little clarification. 12 PPM = 12 parts per million = 12 microseconds per second = 43 milliseconds per day = 0.602 seconds per fortnight. Most computer clocks have systematic frequency errors less than 100 PPM, but some considerably more. These errors are due to the manufacturing tolerance and each clock oscillator is different.

Computer clocks are like a cat who never remembers where it has been, only steps ahead in more or less random directions. The cat has a general idea in which direction leads to food, just not a precise idea of how to get there. Mathematically, this represents random walk frequency noise. The important fact about this is that predictions of future cat directions get worse more rapidly as future time recedes.

The “after one year” has to do with crystal aging characteristics. The cat gets old and starts steering more to one direction than the other. Really clever clock discipline algorithms attempt to learn the particular cat aging characteristic and compensate for it. Unless you are talking about oven controlled quartz or rubidium or cesium, this is not something we do with computer cats.

This brings up the notion of specifications “after one day”. Whoever said that doesn’t understand cats. The cat forgets just about everything after maybe an hour. Anything said after one day applies equally after one hour as the cat wanders. The really ugly bottom line is that, considering the cat’s memory, it doesn’t make sense to try to discipline the feline by averaging things over much more than a thousand seconds or so. Lots and lots of professional folks who should know better don’t understand this.

Most folks, including me, characterize each clock oscillator in terms of what is called Allan deviation. The bottom line is that most computer clocks can steer to something like 1 PPM relative to its intrinsic frequency error and without outside discipline as long as nothing violent temperature-wise is happening.

As David Craggs (and others) pointed out, the calculation is obviously wrong: 12 PPM correspond to 43 ms per hour, and not per day. Likewise an error of 0.602 s per fortnight corresponds to a frequency error of 0.49 PPM.

9.1.3 How can I convert an NTP Timestamp to UNIX Time?

The following Perl code presented by Terje Mathisen (slightly improved by Ulrich Windl) will do the job:

9.1.4 Where can I find more Information?

There are various sources of information about NTP. The following list is definitely not complete, but probably a good starting point:

Table 9.1a: Some RFCs related to NTP

This section tries to give some information about GPS.

The Navstar Global Positioning System (GPS) was developed in the seventies by U.S. military forces to supply position and time information all over the world. The system (to be precise: the GPS Space Segment) consists of 28 satellites (also termed Space Vehicles) orbiting the earth in six groups with four satellites in each group, roughly 20000km above the surface (12 hour orbits). Current Kepler data can be found here. There is also some visualization software named WXtrack.

Each satellite has four atomic clocks (two Cesium, two Rubidium) for very high precision timing on board. (The very first and the latest satellites lack one Cesium clock.) Currently it is controlled by the United States Air Force Space Command, Second Space Wing, Satellite Control Squadron located at the Falcon Air Force Base in Colorado. The satellites are monitored and controlled from four additional terrestial stations: Hawaii, Ascension Island, Kwajalein, and Diego Garcia.

To maintain the specified accuracy, most of the satellites require daily updates of their data, but some of them can receive and store corrections for several days. Under normal conditions the attitude error of the satellites is within 0.5°, and the error on the surface is 16m. If no corrections are uploaded for 14 days, the positioning error on the surface will increase to 425m. After 180 days the error will be 10km. If a satellite operates without current correction data, it is in extended operation.

The carrier used by the satellites to broadcast is 1.57542GHz, and the basic information consists of a pseudo-random noise code of 1023 bits, sent within 1ms (clocked at 1.023MHz). The noise code is specific for each satellite, modulating the base carrier to produce a spread-spectrum signal. Transmission starts at the beginning of a new millisecond. This allows setting the receiver’s clock modulo to 1ms. The pseudo code can be used to lock the receiver within up to 10ns, depending on the noise of the signal. When using the carrier phase, the phase in the receiver could be correlated as close as 1ps.

Due to the military origin of GPS, the data is sent in a way that will not allow obvious decoding. For example, one bit stream is combined with a pseudo-random number sequence that spans seven days. Fortunately most of the secrets are explained today.

Basically the system works as follows:

Although derived from UTC, as presented by the U.S. Naval Observatory master clock, the UTC(USNO MC), GPS time does not include leap seconds found in UTC, but the data stream provides the difference from UTC in seconds. At the time of writing the difference is 18s. While the difference between UTC and GPS time will change over time, there’s a fixed offset between TAI and GPS time (19 seconds).

There is a military document describing the details of GPS, and it is very technical, but unclassified. The document is named ICD-GPS-200 (thanks to Nicolai E M Plum). Thanks to John Sager for the current version.

Example 9.2a: A Glance at the GPS Sky

Example 9.2b: The Effects of Selective Availability

Most GPS receivers are unable to compensate for Selective Availability. As a virtually changing position causes time offsets (roughly 3ns per meter), it’s interesting what the effects of SA are. For my GPS167 from Meinberg I examined the gps_position(LLA) that the clock driver showed. The following graphic shows the changing position over time, including a smoothed path. 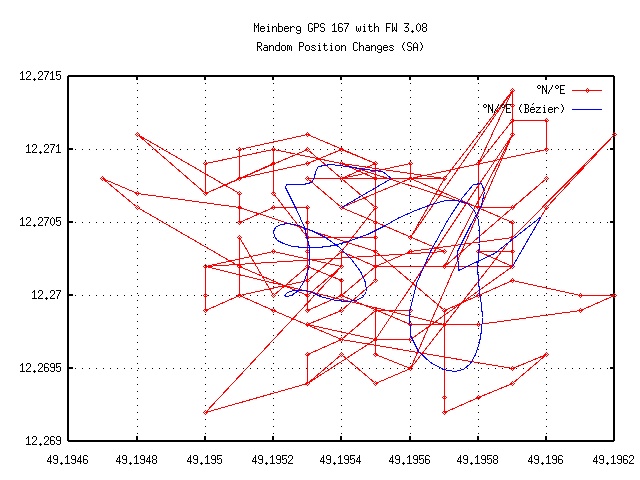 These position changes have a comparatively small effect on time accuracy, but if one considers the computed altitude, the huge changes can accumulate to a few hundred nanoseconds. The following graph shows the varying altitude over time.

Finally, the following figure combines the three coordinates in space to give you an impression on how accurate GPS is: 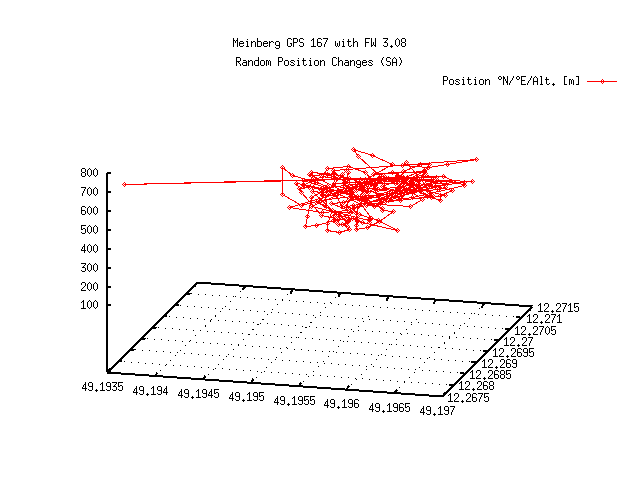 On May 1st, 2000 there was an announcement about turning off Selective Availability (SA). The document titled President Clinton: Improving the Civilian Global Positioning System (GPS) quotes Bill Clinton: “The decision to discontinue Selective Availability is the latest measure in an ongoing effort to make GPS more responsive to civil and commercial users worldwide. –This increase in accuracy will allow new GPS applications to emerge and continue to enhance the lives of people around the world.”

However the algorithm that is used for SA is not explained, and it seems SA has just been replaced by more selective availability. “New technologies demonstrated by the military enable the U.S. to degrade the GPS signal on a regional basis. GPS users worldwide would not be affected by regional, security-motivated, GPS degradations, and businesses reliant on GPS could continue to operate at peak efficiency.” Pay attention to the wording (…) “could continue to operate (…)").